i found some new stuff. 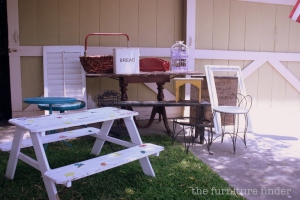 i was on my way to the park with my family when i spotted it.

Actually, i was on my way to our second park because the first one had a gate and a sign that said closed (who knew parks closed in mid-day?). normally i don’t drive down the street that i spotted the stuff because it would be the long way to our home. since we weren’t headed home….i took the long way.

so glad i did!

i flew passed the curbside freebies and braked  (or is it broke?) as fast as i could. i quickly reversed the car back to the stuff to see if there was anything worth salvaging. there were a few pieces i got a little giddy about. 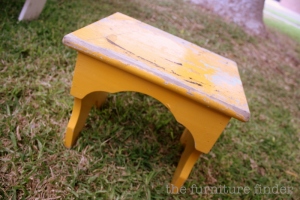 it wasn’t hers. phew! (no more embarrassment)

then she called to another neighbor, “hey, is this stuff okay to take?”

a women about my age appeared. she looked tired. she was very thin with long jet black hair, covered in tattoos and smoking a cigarette.

she nonchalantly and without eye contact answered, “yes.” i said, “thank you,” and i kept picking through the pile.

from there, i’m not sure how it happened, but before i knew it the woman and i were talking about furniture and our love for all things old. and how she collected really awesome old doors and windows. “oh, and i have this cool old table in my backyard, ya wanna see?”

yes, yes i would.

she showed me the table. it was rough from being neglected, but i could still see the beauty.

we continued to talk and she continued to show me the treasures that showered her backyard. her earlier tiredness seemed to be disappearing.

i think at one point i even half jokingly said we were like “soul sisters” because we were bonding so much over our love of old things. it had only been two minutes since i first met this person.

then i remembered that my husband was waiting in the car with our son to go to the park. thank the Lord for patient husbands who understand your overly awkward love for old furniture, especially old free curbside finds.

the lady and i decided at that point that i should come back with our truck to pick up some of the stuff she had showed me. we also decided to exchange phone numbers, in the event that she couldn’t fit all of her treasures into her storage unit and needed to find them a home. (oops…forgot to tell you that part. her and her husband and kids were moving. and in a hurry.)

see, i guess what i didn’t know at that moment, was that she had been crying earlier because her and her husband needed to clear their things out of their home and she didn’t have room to take them and couldn’t bare to just leave her treasures behind. 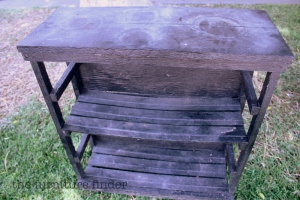 i think i’m getting ahead of myself…let me back up. those who know me well, know that this is often how i tell my stories. i tend to jump around. i have lots of random side notes. hopefully, ya’ll (no, i’m not from the south. i just think it’s cute when i hear the other bloggers say that and so i’m going to pretend i can say it, too) are still following me.

my husband, son, and i headed to the park. i had this strange feeling and mentioned to my husband that the series of events seemed more than just finding curbside freebies, it’s like a G thing. G thing being God thing. (side note: i have no idea why i used an acronym for God, but hearing and reading catchy phrases like o.m.g, and cray cray, has apparently leaked into my vocabulary).  see, i don’t normally say that. that it was a God thing. it sometimes sounds a little cliche’ to me. i very much believe in God and very much believe in events being orchestrated by God, but i don’t say that it’s a God thing unless it really hits me, smacks me, pushes me to my knees, kind of God thing.

This was one of those times.

it’s hard to really articulate why. i guess you might have had to be there, but it just had that feeling. ya, know?

after we got home from the park, i grabbed the quote i had typed out the day before by Ernest Hemingway: “eventually, life breaks us all, and, afterward, many are stronger in the broken pieces.” i tied the quote to an extra skeleton key i had, hoping she adored them as much as i do, and i hit the road in our truck back to her house.

when i got there i handed her my little gift of thanks and said that the quote was one i thought might bring her comfort in her time of hardship. she welled up and i gave her a big hug. such an odd spectrum of emotions to share with someone i had just met an hour earlier. that was definitely not an everyday occurrence.

(side note: she loves plants. like LOVES plants. she had hundreds in her backyard. i was nervous to take them because i don’t have the best green thumb, but she was quite worried about leaving behind this key lime tree. she said she was sure they wouldn’t have room. i told her i would take good care of it. and maybe even attempt a key lime pie}

when we started talking, early into our conversation, she said something that gave me goosebumps. at this point we hadn’t talked at all about our religious views or our faith or whether we had any or not. see, i’m kind of shy about sharing my faith. sure, if someone asks then I’ll tell them, but it’s not something i just hand out. i admire those that can so freely. it’s just not my gift. she mentioned that her mom was very religious and a hard core Christian and always telling her she needed to find Jesus! She kind of rolled her eyes and then she said, “ya know, it’s like i’m being smacked in the face by all the stuff my mom has said. i always tell her that if God really cares, then why doesn’t he help me when i need him most? and then, you come along and love my stuff  and i know it’s going to a good home and i don’t have to give it all to Goodwill. and my tree will get taken care of . and well, we start talking and well…it’s like a God thing.”

oh.my.gosh. she was right. it was a God thing.

the best part? i felt like it was God smacking ME and saying, “hey, hey, you! remember me? don’t forget about me now that times are going good. i want to be with you always, not just during the hard times.” i needed that reminder.

so, back to what i was saying….tonight i found some stuff, and it wasn’t just furniture.