welcome, to our little family cabin. while this is not Old Towne Orange, it is still in Southern California in our local mountains.

this little cabin has a lot of history. at least to our family.

see, my great-grandfather built it with his own two hands in 1937. he had bought the land for ten dollars (yes, TEN dollars! what a steal! can you imagine if we could buy land today for ten dollars? WOW-za!).

my great-grandfather was a contractor, so he used leftover materials and scraps to build the cabin. (i love that tidbit of information….a man after my own heart!)

(this little black and white sign was a nod to his last name, which was also my grandmother’s maiden name. it has hung on the outside for as long as i can remember.)

and though the cabin is small and quite rustic, it has made and stored many years of memories. when my great-grandfather became elderly, he passed it down to my grandmother, who will eventually pass it down to my dad and uncle and so forth. it has been threatened by forest fires a number of times, but luckily always escaped unharmed. 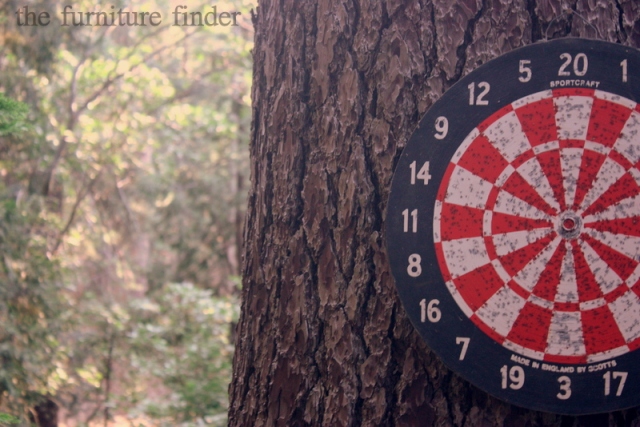 when i was little, we would often pack the cabin so full of people that you could hear laughter echo in the valley behind it. my dad told me that once they had forty people come stay in this little one bedroom, one bath cabin. 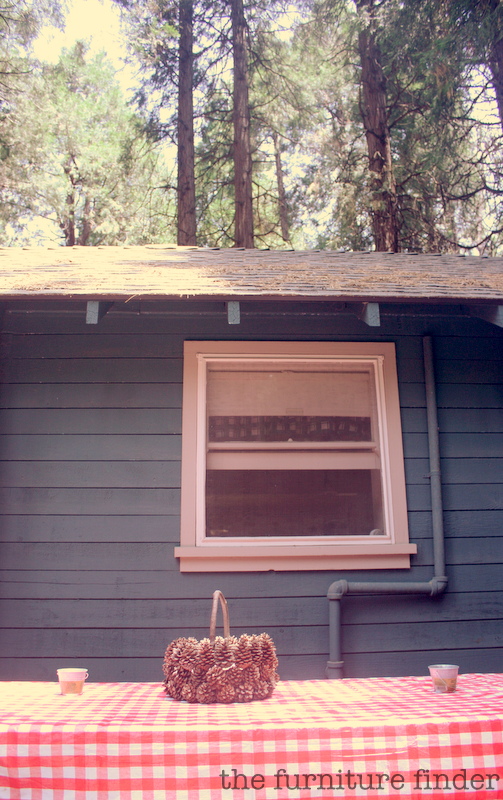 the grown-ups would always stay up late playing games (usually rummy) and the kids would talk or read comic books in the bunk beds (a memory so ingrained in my mind, it feels like yesterday).

when i was little, my dad would tell me stories about how he and his friends would sleep on cots on the back porch if there were too many people and not enough beds.

occasionally, pine cones would fall from the trees and make a loud CR-ASH through the forest. it’s a sound that strangely brings me a sense of nostalgia now. 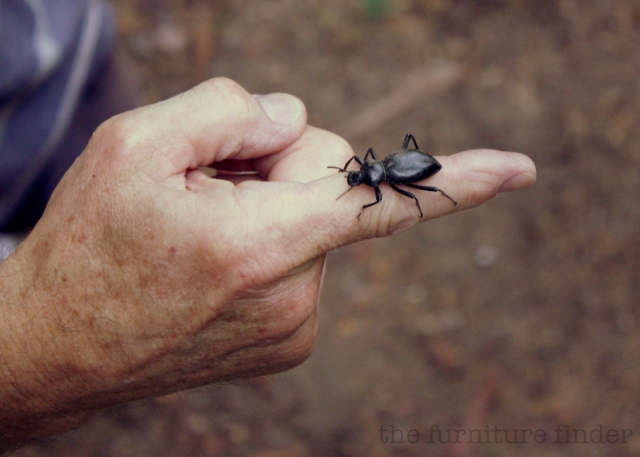 and the bugs. OH the bugs. we always have a bed check before you climb into the sheets. gross, i know, but necessary when you’re out in the wild. (no, we never have found a stink bug in our bed. just the occasional spider. ew. my father, however, is apparently not afraid of the stink bugs. i decided to take this picture  standing from the safe distance of the back porch.)

(this painting was done by my great-aunt years ago. you’ll notice that there is a tree coming out of the porch. my great-grandfather built the cabin around it. for some reason, the tree was removed, but i can remember playing around it at a young age.)

the inside of the cabin, is similar to the outside: simple and rustic.

the decor is a bit outdated and most of the furniture is left over pieces throughout the years from various family member’s homes.

despite the dated decor, i love the simple details the cabin has….

old door knobs, tongue-in-groove wood pine planking, and old family memorabilia like a quilt my grandmother made with her mother. 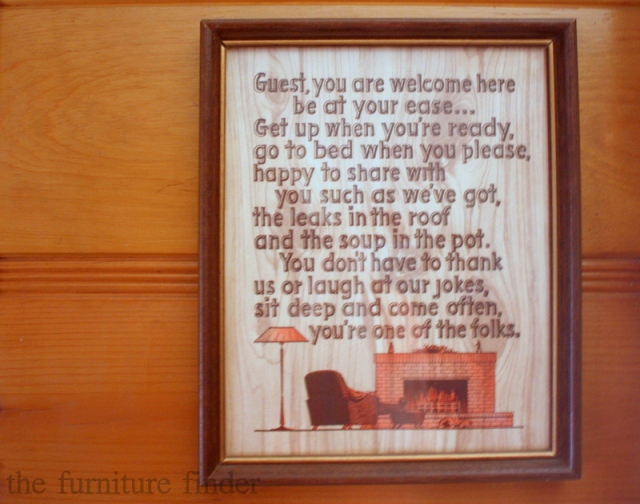 throughout the small space, there are various quotes that have welcomed guests throughout the years. there are even guest books that have been filled with loving messages of the people who have stayed here. it’s so fun to read the words of past family members; some of which i never knew.

the windows are all original from the 30’s. if you go up closely, you can see little bubbles that have formed and stayed in the window panes; a sign of their age.

out of all of the cabin, i think the kitchen nook is my favorite. it holds the most memories for me, and also my first memory of the cabin. i’m not sure how old i was, but it was most definitely one of my first visits (from what i can remember). the entire table was surrounded (or more squished) with family members eating dinner. there must have been at least eleven people crowded around the table. there was laughter interspersed between the talking.

after the dinner dishes were cleared from the table, the cards came out to play! i always loved to wash dishes at the cabin. such a strange delight because it does not have the same effect as when we are home. maybe it has something to do with the fact that doing the dishes at the cabin was always a family affair. you never had to do them alone. someone was always the washer and a few others were always the drier.

while we were up at the cabin this last weekend, my dad mentioned that we should clean out some of the closets and cabinets sometime, because there might be some treasures.

little did he know, that i would get to work right away (“sometime” seemed too far away). 😉 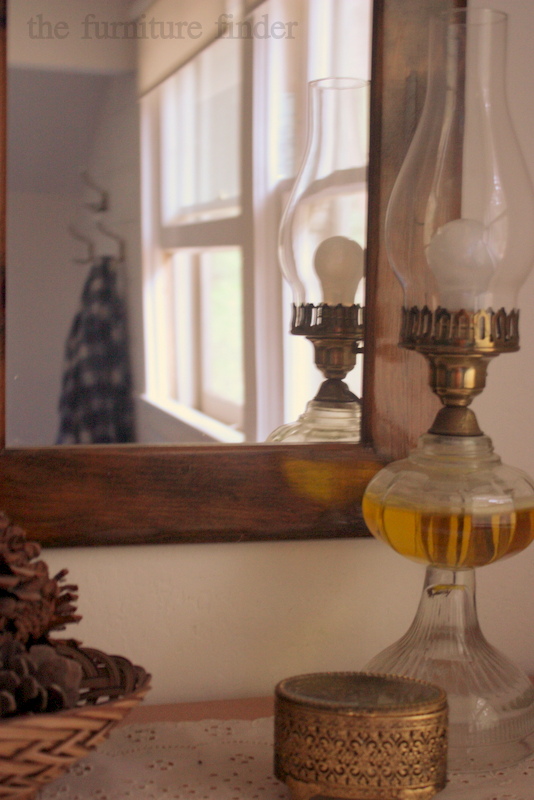 so, i spent some time looking through the bedroom dresser and found some old long johns and slippers.

not quite the treasure i had in mind. 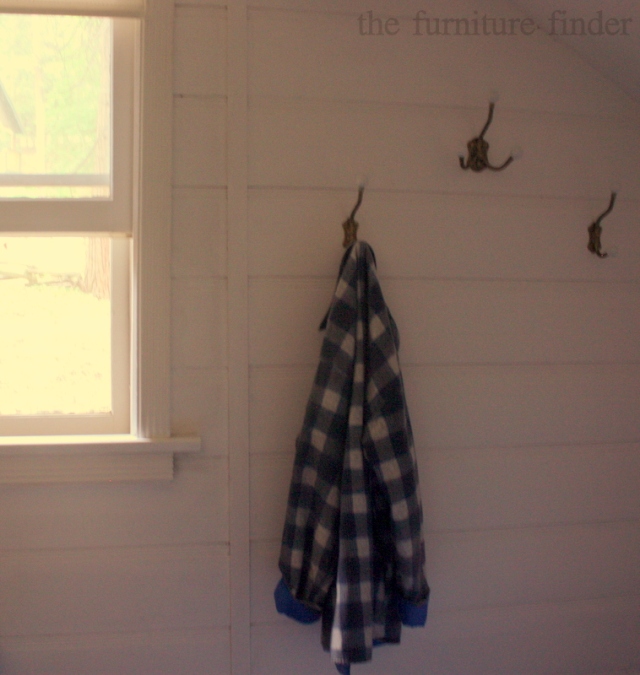 and then i remembered the hidden cabinet in the kitchen nook. it was where we kept all of the games and toys we used to play with when my brother, cousin, and i were kids.

so, i started to pull out game after game after game. i had no idea there were so many, but some of them were from the 1930’s! the packaging alone is so cool!

and then at the very bottom, i found these: old tootsie toy cars and trucks from the 50’s. most likely my father and uncle’s toys. my dad was pretty excited.

so was this boy. he could hardly wait for me to take the picture of them, so he could start playing.

so, although it may be small and rustic, i love this little cabin and all of its priceless treasures.